Dairy farmer, Eric Easom along with his brothers David, John, and Mark, sister Helen, are second generation farmers at Broom House Farm, near Buxton and have started implementing the use of male sexed semen. Their efforts are now paying dividends within their specialist beef unit, which was previously used for finishing dairy bull calves.

The family have been at the farm since the 1946 and started as a mixed farm before moving towards specialising in dairy; they are now milking 340 Holstein cows, averaging 10,376Kgs of milk and recently winning awards such as the Derbyshire Holstein Club Show competition 2018.

When the opportunity arose ten years ago to rent a neighbouring farm, the Easoms jumped at the chance, a family attitude that shows through most of their decision making. Firstly, they used it to house dry cows, but they soon realised they could use the space and family resource to create a specialised beef unit to rear and finish the Holstein bull calves that were being born from the conventional dairy semen they were using across the whole herd.

The Easoms are waste conscious, and so work with a local bakery collecting any surplus bread to process on-farm which goes into a grain-based diet which they feed to their beef animals. They also use the by-product of rolled oats as a bedding alternative rather than straw as it is broken down more efficiently to be processed by their Anaerobic Digestor, which was installed to generate electricity and heat for the farm. Finishing dairy bred bull calves fits within the ethical strategy of the farm business. “We are rearing and finishing 100% of the Holstein-bred bulls at the farm, which go to slaughter at 12 months old. In total we rear about 180 per year and sell through Meadow Quality” says David.

The family are very forward thinking and have implemented a progressive breeding strategy, whereby they have used genomic testing and parent averages to select the top 20% (genetic elite) of cows to serve with Holstein sexed semen. 80% of heifers in the herd also go to Holstein sexed semen. “The quality of AI bulls has increased, and more bulls are now available as sexed, so we decided to give it a go” explains Eric. They have seen great results while increasing the genetic gain at a faster rate within the heifer replacements, the SexedULTRA 4M Rubi Agronaut semen has seen some greater conception rates than the conventional semen they have been using. Historically, they would use Holstein conventional semen and finish all male animals, but the change in strategy to SexedULTRA 4M semen on the dairy has led to using male sexed beef semen on the rest. Because of this success, they can now gain some real profit by swapping out the lower value Holstein bull in the beef unit to specialised beef breeds to increase the quality and value of the entire beef unit.

“The higher cost of the semen is justified on the beef unit, because we have found that a British Blue bull at 12 months achieves £250 more than a Holstein bull at the same age. We haven’t changed how we rear animals, we have just changed the breed that we use” David explains. The family wanted to continue to rear bull beef, so the decision to go to male sexed over conventional was to ensure they reduced the number of female calves born, in order to achieve maximum value from their calf crop.

“We are very pleased with the British Blue ‘Auchenlay Hitman’ calves born out of sexed semen, we have not lost a calf, and have never called the vet out for a difficult calving. With only two females out of 60 calves born from male sexed Hitman, we’ve had a good rate of gender accuracy” explains Eric.

“We are using British Blue sexed semen on the cows to produce some good quality calves, and male sexed Limousin on heifers. Ultimately, our aim is to increase the quality and value of beef going out of the unit and male sexed beef semen is the key to our success."

Broom House Farm is currently finishing around 180 male beef calves per annum, which are all housed on a rearing and finishing unit which is well-managed by David and Oliver. The calves are reared on milk until they are 3 months old, they are then transferred onto the home-made grain ration. Once the calves are weaned, they are grouped into batches of 12 in which they will remain throughout their lifetime. “The bulls leave the farm at around 600kg liveweight, so they achieve a carcase weight of around 300kg” Oliver explains. He also went onto explain that they achieve good grades with their Holstein bulls so hope to exceed these with the British Blue cross cattle.

Looking to the future, the family aims to continue rearing British Blue bull beef as it is a good supplement to their dairy enterprise. 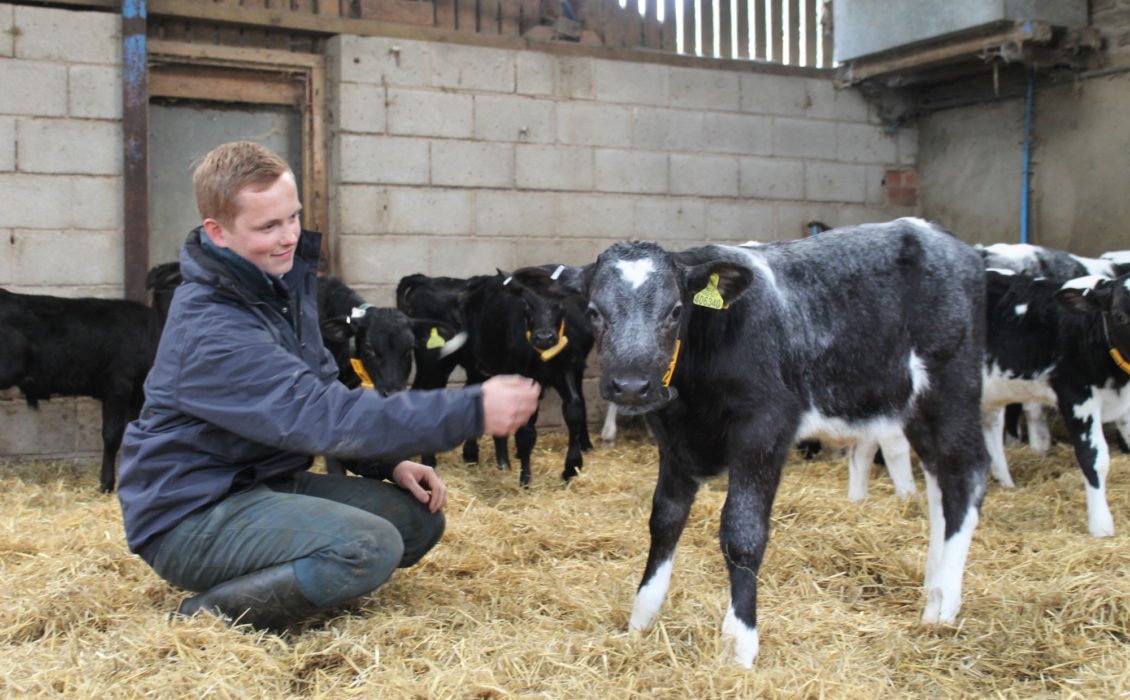